A new football coach made such a lasting impression at Parkview that not only were two brand new teams created, but an annual football tournament was born.

The Parkview Physical Education Department offers pupils a range of physical activities which cover all aspects of the Physical Education Curriculum_ From cycling to tennis, swimming to Jump Jiggle and Jive, Zumba to Pilates, and even the trips to the Belfast Activity Centre, pupils are given every opportunity to develop their physical well­being.FOCUS ON FOOTBALL

It all started when Mr Gary Devenney from the Irish Football Association (I FA) contacted Parkview offering Fundamental Movement Skills (FMS) coaching. Gary has a fantastic rapport with pupils and they were so excited and motivated to participate in his 30 minute coaching sessions. Throughout the weeks pupils grew in confidence and their kills massively improved.

From this we established our very own Junior and Senior Football Teams with very keen and skilled players. These two teams attend weekly training sessions with our in-school football coach, Mr Nigel Prentice and the teams are getting stronger as the weeks go by! Michael Taylor, owner of MST Transport, agreed to sponsor the new school football kits. Working with Jayne Frazer from the Signature Works, the pupils helped to pick colours and designs and we waited patiently for the new kits to arrive, which looked fantastic!FOOTBALL FUN DAY

A local football club, Ballymacash Rangers have been supporting Parkview over the past few years, raising money and making donations and through this connection a strong friendship has built up between the school and club.

Mrs Bowes, Parkview’s PE Coordinator, decided to organise a football tournament to celebrate our new kits and to show off the teams’ skills on the pitch, so 12 special schools were invited to play and the tournament date was set for Thursday, October 12, 2017.Two separate competitions ran side by side to compete for the two prestigious trophies.

Mrs Bowes put in so much effort to ensure the day was a huge success. The schools competing for the ‘Blue-Bell Trophy’ were: Brookfield, Ceda,. Lodge, Knockevin Juniors, Harberton, Longstone and St Gerard’s. The schools battling out for the ‘Parkview Cup’ were: Tor Bank, Ceara, Knockevin Seniors, Knockavoe, Glenveagh, Sperrinview and Parkview.
For such an active day the players needed some encouragement and motivation which was delivered by the ‘Mr Footy’ mascot brought along by Jayne Frazer, from the Signature Works. We all agreed that his antics and moves kept everyone in high spirits! Throughout the day it was clear to see every player gave it 100 per cent. The matches were fiercely competitive but all played with a great sense of fun. The overall winners in our Junior competition for the ‘Blue­Bell Trophy’ were Cedar Lodge. The overall winners in our Senior competition for the ‘Parkview Cup’ were Knockavoe. Huge congratulations to both of these teams and a massive well done and thank you to all schools involved.

Throughout the day we had a few very special visitors, MLA Mr Paul Givan and Alderman Paul Porter, who came to cheer on the teams. The Mayor of Lisburn and Castlereagh, Councillor Tim Morrow (APNI) was there to cheer on the teams and also to present all players involved with medals. The Mayor also presented the two winning teams with their trophies. Mr Alan Crooks from the FA assisted the Lisburn Referees, Norman and Davy throughout the tournament. The referees commented on the ‘fair play’ of all the players and thought some of the Premier League Footballers could learn a thing or two from our superstars! Finishing the day-off with a burger was a great way to send everyone home happy!

Special thanks goes to Neil Woosley from Ballymacash Rangers FC. Not only did he let us use his facilities but he also went out of his way to organise special guests to attend and arrange food for all players and staff. We would also like to thank Sport Lisburn and Coca Cola for providing refreshments for all players. Another big thank you goes to Constable Curran and her colleagues from Lisburn Neighbourhood Policing Team who provided a watchful eye over the proceedings.

Parkview Football Fun Day was a great success and it has been agreed that this will be an annual event hopefully attracting more teams from our Special Schools next year. Thank you to everyone who worked hard to make it such a huge success. 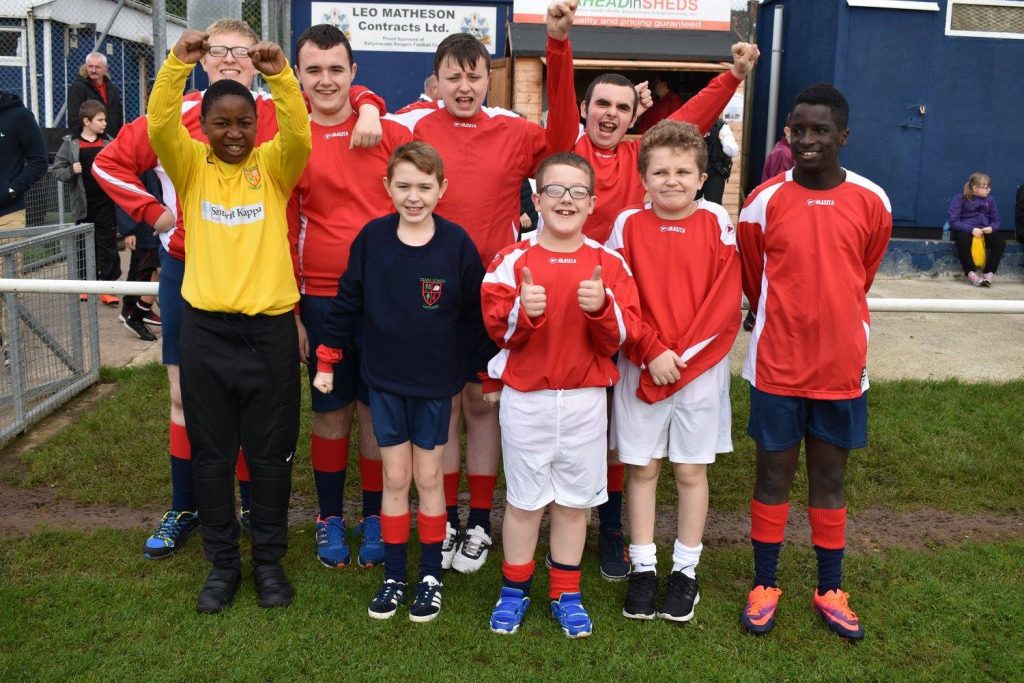